These Norfolk videos will give you a little taster of some of the true delights that Norfolk offers you.

A county with such an abundance of wildlife, culture, amazing coastline, castle and abbey ruins and incredible stately homes, there is so much to see and explore in Norfolk that you are spoilt for choice.

Hunstanton To Thornham Along The Norfolk Coast Path

This Norfolk video takes you for a walk along the first very short stretch of the Norfolk Coast Path, a UK National Trail.  With stunning coastal views and easy walking, I walk from Hunstanton to Thornham to show you what it's like to walk this wonderful path.

You can read more about the Norfolk Walking Holidays here.

This is a lovely 6.5 mile varied walk from Cromer starting along the Weavers Way until you reach the National Trust property and grounds of Felbrigg Hall.  From there you go up into the woodlands around the Roman Camp and back down along quiet paths all the way into Cromer.

This is one of the most amazing spectacles you will ever see.  It's just like a magic trick, or it's like those gymnasts who perform with the ribbon attached to a stick (sorry, not sure of the technical name!).  Nature is an amazing thing, and RSPB Snettisham  wader spectacular provides one of life's true wonders.

The Snettisham Spectacular is just one small part of what makes the county of Norfolk such a special place for bird watching.  With the NWT Nature Reserves such as Cley Marshes, and the RSPB sites such as Titchwell, Norfolk has an abundance of places you can visit, walk and tour.

Seals and their pups at Blakeney Point and Horsey

The seals and their pups are an amazing sight to see and this Norfolk video gives you a little insight into what you might expect.  Horsey Beach, on the east coast of Norfolk,  is the best place to visit during the winter months for a walk and wonderful viewing from the top of the sea wall, where as you would to take a boat trip with the National Trust to see them on Blakeney Point.

If you're wondering whether you feel like an 8 mile circular walk around the Ice Age Pingo Ponds, along a stretch of a Roman Road, overlook a man-made mere and walk along a disused railway line, then this is the walk for you.   You can find the details of the Pingo Trail walk here.

The Peddars Way is a National trail that goes from Knettishall Heath which is just outside Thetford to the wonderful Norfolk coast at Holme-next-the-Sea.  It's a wonderfully peaceful historic walk following an old Roman road.  Some of it is arrow straight, passing alongside open countryside and pretty woodland and taking you through a few typically Norfolk flint stone villages.  You can find out more about The Peddars Way here. 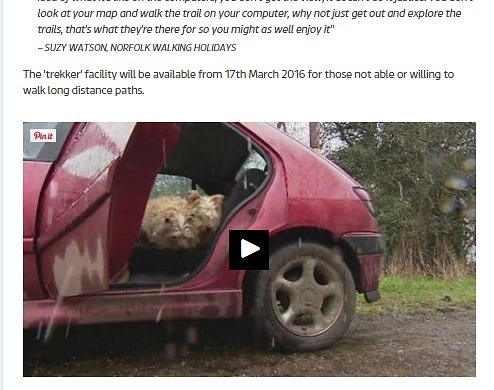 This video is courtesy of Darren Cook who has put together a lovely video on walking to Blakeney Point.  This can be a tricky walk, especially if the tide is high, as it involves a lot of shingle.  Blakeney Point is also a nature reserve, so if you are taking your dogs, please keep them under control at all times, as it's an important nesting ground for terns, as well as the seals.

A Norfolk Video on Blickling Hall

This is one of the Norfolk Videos that showcase Blickling Hall,  one of the most magnificent Jacobean houses you'll come across in Norfolk, and maybe in the UK.  Set in the beautiful surrounding of the park and gardens, it's a real taste of "Upstairs, Downstairs".  With the butlers and servants living below, and the family living in the splendour of the many extravagant rooms, you get a feel for how life must have been.

This is one of the best child friendly Norfolk beaches on the North Norfolk coast.  With a massive expanse of sand and sky, nothing beats Wells beach.

There are so many beaches in Norfolk, about 50 in all if you pick all the little tiny ones too.  And the fascinating thing about them is that they vary so much.  The beaches on the east coast of Norfolk, such as Gorleston or Walcott, or even Happisburgh, are not nearly as big as the ones on the North Norfolk coast.

The Norfolk Norfolk coast has beaches which span out as far as the eye can see;   Holkham, Brancaster and Burnham Overy.  Or you have the wonderful and busy Victorian seaside beaches such as Cromer beach and Sheringham.  So many to choose from, they world's your oyster!

Oxburgh Hall is a stunning example of a Tudor mansion, one of many stately homes dotted around the Norfolk countryside.  As with so many of these houses, the interiors and gardens are beautiful, we are so lucky to have these here in Norfolk.

We are so lucky in Norfolk to have so many stately homes.  Blickling Hall is my absolute favourite, but with Sandringham House and it's royal connections, and Houghton Hall and Holkham passed on through generations and still lived in by the current custodians,  history comes alive in Norfolk when you visit these amazing historical houses.

And don't worry, I will be adding more Norfolk videos, why not bookmark this page, and also visit my Photos of Norfolk Gallery.