I started off today full of optimism, knowing that I was going to get some tough walking over shingle but looking forward to catching more glimpses of the wildlife I’d experienced in the previous 3 days.  Today was not to be however, and I was slightly disappointed, but having had three excellent days of bird watching I shouldn’t complain! 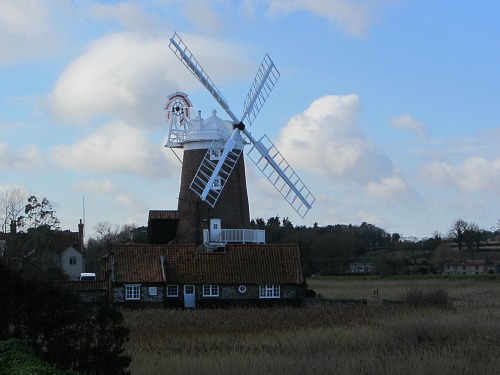 Starting at Cley, I marvelled at the beautiful windmill that is so prominent to this particular village.  I walked slowly through the village, passing the picturesque flint stone cottages and small independent shops, the Pink Foot Gallery and the Picnic Fayre to name just a couple.

Along the bank heading towards the beach, I had wonderful views over towards the Cley Nature Reserve with the lovely thatched hides in the distance.  On I went, passing the gun turret (shows how strong they were built as I don’t believe it budged in the tidal surge of December 2013 or the storms back in the 50’s or 70’s!) 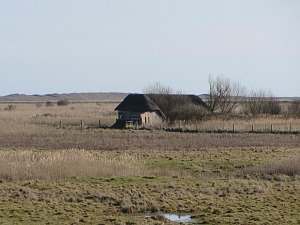 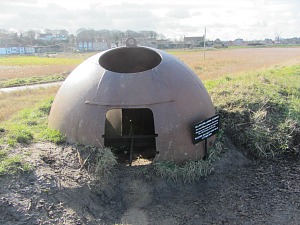 After a short while I could hear the waves breaking as I was getting closer to the beach.  As usual on this beach, there were the iconic tractors and boats along with lots of lobster pots sitting neatly on the shingle ready for the next fishing trip.

Cley beach is definitely not a bucket and spade beach!  Shingle, shingle and more shingle.  Miles of it.  I tried to pick and choose where I walked, close to the fence marking the boundary of the nature reserve, trying to find hard ground and passing a partially covered pill box.  Today there was very little wildlife, so I concentrated on heading east, trudging over concrete slabs strewn over the shingle, but I could see in the distance the first sight of the cliffs at Weybourne, calling me to them!  It was quite eye catching to see a change of coastal scenery. 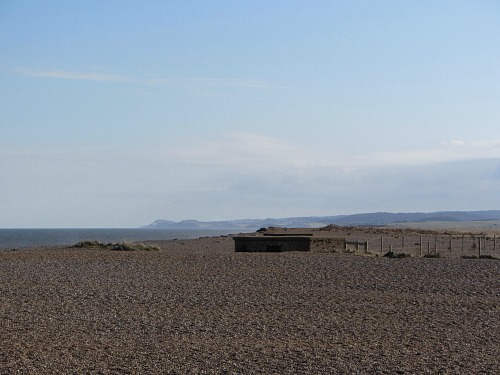 I passed a handful of bird watchers and walkers, as this stretch of the walk is right on the edge of Norfolk Wildlife Trust’s Cley Marshes reserve, which has an excellent circular walk and a few hides along the way, as well as the very modern visitor centre.

A poignant moment came when I walked past the memorial to the helicopter pilots who died in a crash here in January 2014. A row of large slabs sticking out of the shingle from the grave towards the sea, a thoughtful memorial.   Unfortunately it was caused by a flock of geese, of which there are always numerous numbers of this particular bird around here and there is now a no fly zone over this area.  I was going to take a photo to show you how poignant it was, but then I thought better of it.

As I carried on, shingle gave way to hard sand behind the dunes and an air of barren landscape prevailed.   It was a strange feeling and quite isolating.  I could hear the waves on the other side, a rather therapeutic sound, and on the right hand side of me the fresh water marshes. 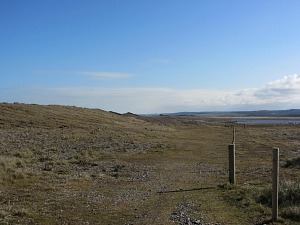 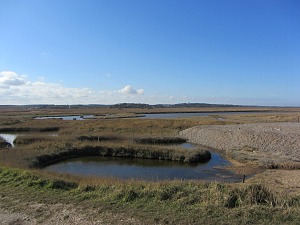 The hard sand didn’t last long though.  There in front of me was another stretch of shingle that I’d have to walk over.   It gave me a very small sense of what it must be like to walk in the desert, you reach the top of one dune and all you can see is miles of the same, more sand and no end to it (but in this case it was shingle and obviously nothing like the desert!).

The next main marker for me was Gramborough Hill, but just before I reached that I happened to look over to my right towards Salthouse.  I was completely taken aback by the very impressive huge church that overlooked the marshes.  It must have commanding views over this stretch of coast.  For me it was a real Wow factor.  It just stood out so significantly.

I knew I was going to get a good view from on top of Gramborough Hill and almost ran up to the top!  I wasn’t to be disappointed.  Once up at the top, I sat down and had a few refreshments, congratulating myself that I’d got through the hard work of the shingle (actually to be fair, it wasn’t as difficult as I thought it was going to  be, it was just rather endless). 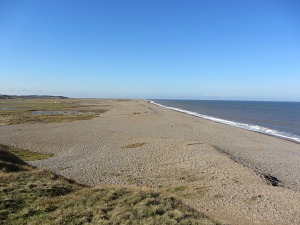 I had time to survey all around me, and look back at the distance I’d walked so far, along a very different bit of the Norfolk Coast Path.   It gave me a real sense of achievement that I’d walked along the particular stretch of coast that I could see in the far distance.

On I went, until finally arriving at some rather splendid gun placements owned by the Muckleburgh Collection.  Although it did say it was private, there were no fences to keep anyone out, so I went up to have a look at them.  To be honest, I thought the track up to the guns was the Norfolk Coast Path, as the signage for this particular bit of the path was not evident at all.  I was glad I went and had a close up view though, it was fascinating.  The Norfolk Coast Path is full of remnants of World War II.  I came across so many pill boxes I lost count! 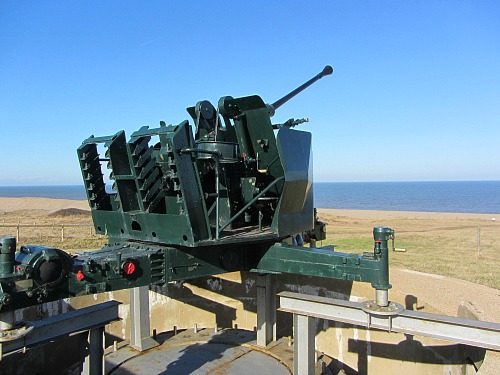 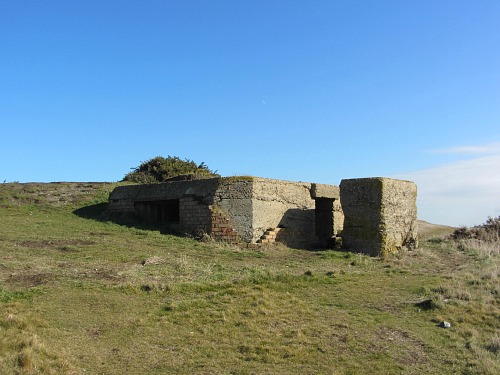 A tiny bit more shingle eventually brought me closer to the cliffs and beach at Weybourne where there were plenty of men fishing from the beach.  Suddenly the landscape changes from here on in.  Apart from the tiny detour after Thornham, I hadn’t see agricultural land until now.  Marshland gives way to woodland and large fields on the right, but on the left I was faced with cliffs for the first time.  Although not huge cliffs, they were cliffs all the same and I was now going to be walking on top of them.  Coastal erosion is very evident here too. 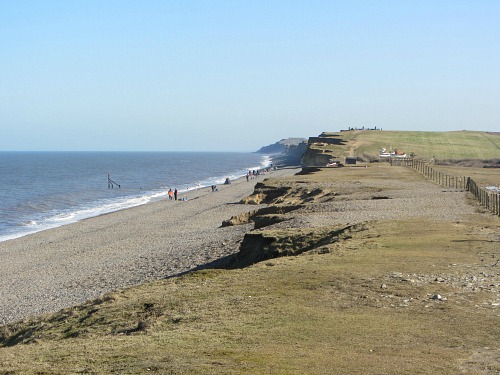 I went and sat on another old pill box and had my lunch, again looking back for miles to see where I’d walked, and watching the fishermen, ever hopeful.   It was strange, after 3 days of incredible views over salt marshes and beaches, to now be walking along the green cliff tops with signs of civilisation becoming more prominent. It got me thinking back to the start of the walk and how very different the landscape now was.

I had a lovely walk along this stretch of cliff top, chatting to a local resident who was walking her dog, and every so often I would turn around to admire the wonderful view.  Eventually I reached the edge of Sheringham golf course, and very popular it was, with the outskirts of Sheringham beginning to show. 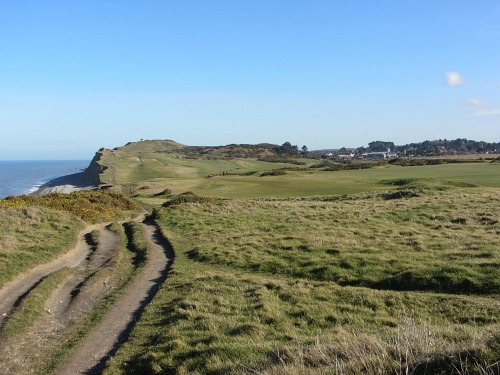 A slight incline up to the top of the coast watchtower and alongside the golf course had me grabbing a bench to admire the views and catch my breath.  This was definitely the highest hill I had climbed so far!  I put a little contribution into the charity box at the watchtower, manned by volunteers, and headed on down towards the groynes that I could see on the beach and the town of Sheringham.

Once on the promenade, I knew that this was where the new Coast Path deviated from the old one.  The England Coast Path has joined up here.  Instead of heading out towards the Roman Camp at Beeston Regis, walkers are now able to continue along the cliff path.  It was fairly well signed, but I did wonder as I was walking up Cliff Road in Sheringham whether I’d got it right.  There was a tiny sticker on the back of a road sign pointing me up Cliff Road.   In fact, I could have just continued along the promenade to the little house overlooking the sea and turned right to walk up the tarmac road there (but then I wouldn’t have been true to the Norfolk Coast Path!).

As of 2016 this path now follows the promenade and then up to Beeston Bump, so you should just follow the signs. 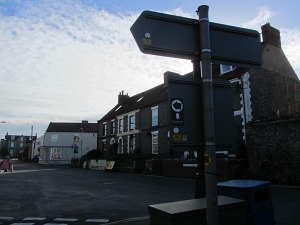 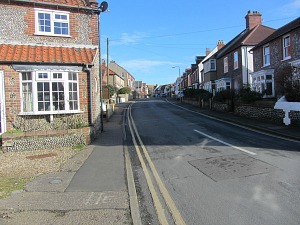 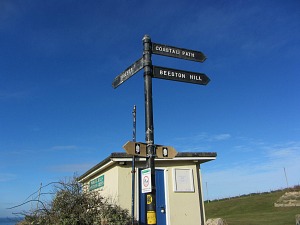 My next steep incline was Beeston Bump.  This is actually the highest point in Norfolk and I could see my end point, Cromer Pier jutting out in the sea.  How exciting was that!  But I did spend some time on the top of the hill reading the information board about how this particular point played an important part in World War II as part of a wireless intercept station, where radio signals were intercepted from the German E boats.  It made fascinating reading. 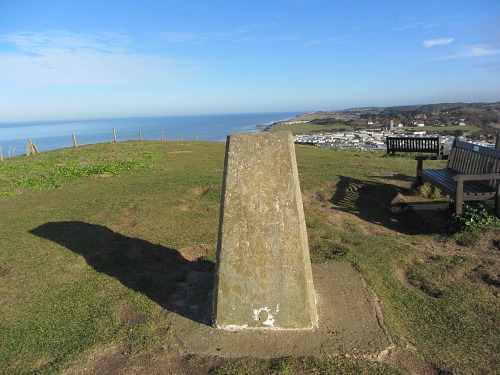 I had amazing views from up here, but I did get an impending sense of doom as I could see static caravan sites covering the cliff tops.  I was wondering if I was going to bypass these, but unfortunately from here to Cromer the walk goes down very much in my estimation.  However, short of knocking down the caravan parks, there’s not much they can do, and I was grateful that the new part of the path stuck to the cliff top as much as it could, rather than heading up into the woodland of Beeston Regis. 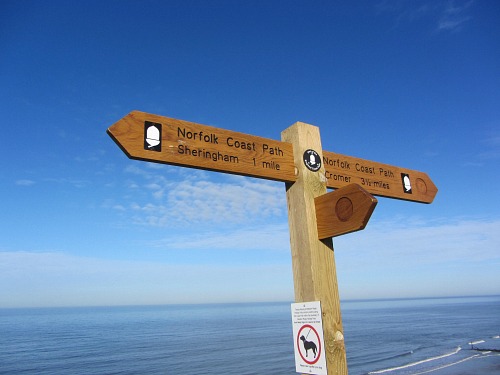 I had 3 ½ miles to go to Cromer, but most of it was the views of static caravans, a bit of main road and personal allotments!  I’m glad to see that owners of static caravans remove all valuables from their caravans during the winter months (as endless notices on their windows told me!). 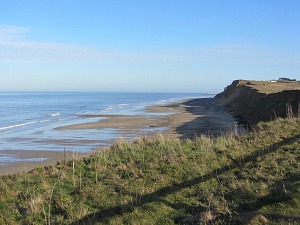 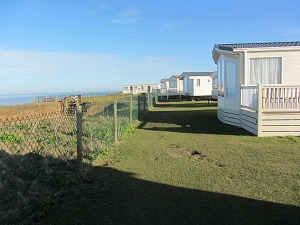 I tried to concentrate on the eroding cliff face and the beaches below as much as I could, and only hoped that once past Cromer, the new Norfolk Coast Path wouldn’t disappoint.  I have had such a fantastic time on this walk so far, it was a big anti-climax for me to arrive in Cromer, and wondered what others before me thought as they arrived in the cliff top car park overlooking the pier?  Apart from a sense of achievement (as this is where the Norfolk Coast Path used to finish), and I did feel elated, I personally had to draw thoughts from the previous 3 days to gain the absolute enjoyment that I’d had from the walk so far (my personal thoughts).  What a world away from the start! 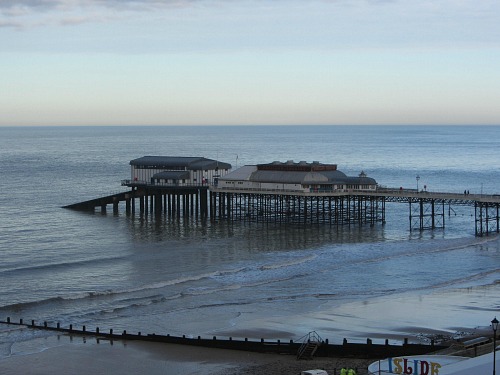 I am looking forward to walking from Cromer to Mundesley in the hope that I may get back to barren coastline once again.