Seal trips to Blakeney Point in North Norfolk are a spectacle you won’t forget and suitable for all ages, including well behaved dogs!

Taking one of the many daily trips from Morston Quay, you get as close up as you will ever get to seals in their natural habitat, but without disturbing them or their surroundings.

And you don’t get just one look at them, you go round about three times, giving you ample photography time and spotting your favourite seal! 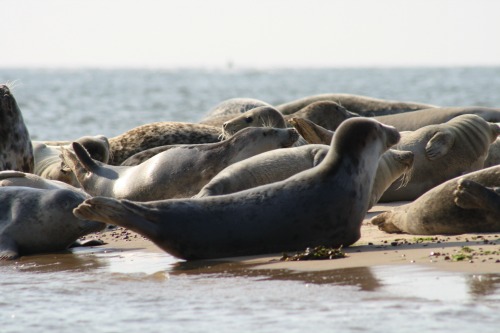 How to see the seals at Blakeney Point

Beans Boats and others will take you to the spit to see the placid seals basking in the sun or swimming nearby.   (Placid when you’re safe in the boat, I wouldn’t like to be any closer on land though).

The seal boat trips are the only way to get there unless you decide to walk from Cley to Blakeney Point.  And if you did feel like the walk, you probably won’t get to see the seals as they are on the far end of the spit which is cordoned off by the National Trust for the conservation of important breeding birds.

Organising your seal trips at Blakeney

In the summer months it’s best to book tickets for the seal trips in advance and choose your time.  Obviously the local ferry boats are ruled by the tide so you have to fit in with them on this seal tour!  You pick your tickets up from their appointed place and then make your way down to Morston Quay to hop on your chosen ferry boat.  In the winter I would advise the same, book your tickets and you'll get to see the Grey seals and their pups.

It’s all very well organised and easy to follow. 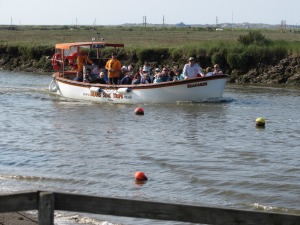 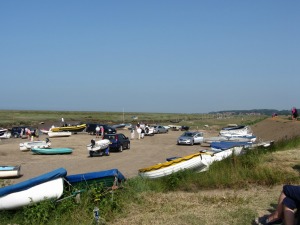 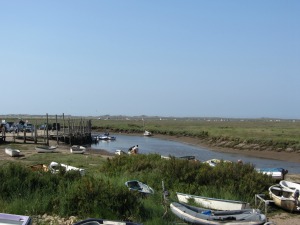 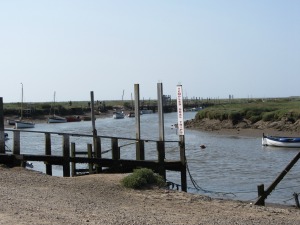 I have to admit I did feel very touristy on the boat, but once you get to the end of the spit and see these wonderful mammals basking in the sun, you forget all about being a tourist!!  And what a spectacle it is!

The boats from all the ferry companies are big and sturdy, without cover, so you must make sure you take a coat or some sort of warm clothing, because once you get out of the creek and into the open, it does become windy.

None of the local ferry boats venture out to the sea, but the weather can be very interchangeable so you need to be prepared for that.  If you go in the summer on a sunny day with just a tee-shirt, I still think you’ll get cold! 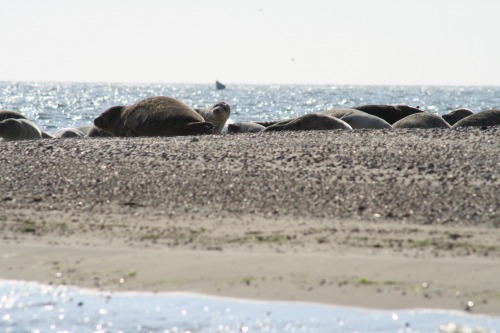 Taking seal trips in the winter is also highly recommended, although best to wrap up REALLY warmly.  In the winter the Grey seals come to Blakeney Point and Horsey Gap to have their pups.   The common seals on The Point have their pups from June-August and the Grey seals have theirs from November to December, so the seal tours are pretty much all year round, but obviously with limited bookings in the winter.   There is more information on seals in Norfolk here.

The other place that the Grey seals have their pups in abundance is at Horsey Gap, a wide open expanse of sandy beach on the east coast of Norfolk.  Here you don't need to book, you can just walk along and watch them for as long as you like.

In the summer however it’s definitely advisable to book in advance as this is a really popular attraction, but one certainly worth doing.  The boats only have certain times that they will go out due to the tide, so you can’t just turn up and hope they’ll be a ferry going out to the Point.  Plan your day in advance.

Most of the ferry boats go from Morston Quay, but Blakeney Point boats go from Blakeney Harbour, so again, check where they leave from.  You also pick up your tickets in advance, but you’ll get told where to do this from when you contact them. 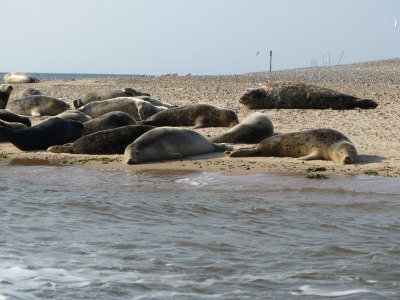 The seals at Blakeney Point

On some of the seal trips, the boats will drop you off for half an hour to an hour on Blakeney Point,  giving you an opportunity to walk around and amongst the sand dunes, visit the old lighthouse which is a visitor centre, or just sunbathe on the beach (which is ideal for children to run around and paddle as well).  However, it’s best to check when you’re booking as some of them don’t drop off depending on tide times.

Do not forget your camera – you will be very disappointed if you do!  The boats go past the basking seals two or three times so you get a very good chance to see different seals each time.  And they are more than used to seeing the boats.

When we went, we were overjoyed by the amount of seals that were milling around.  Some were swimming in and out of the sea, coming to look at us, poking their little noses out of the water. 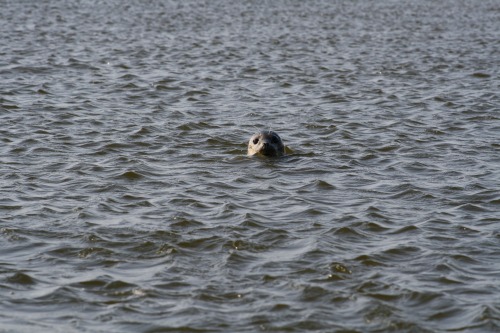 Others were having a lovely time showing off to us, clapping and cleaning themselves and showing us how beautiful they were. 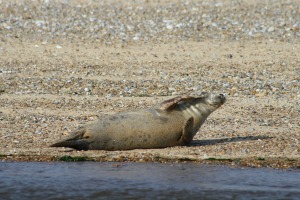 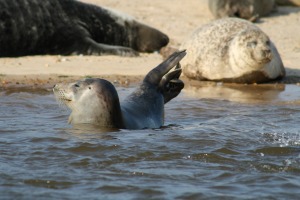 While others were just too lazy to move!  And watching them move about on shore was very amusing – this big mass of body trying to lollop up the beach made you feel quite sorry for them. 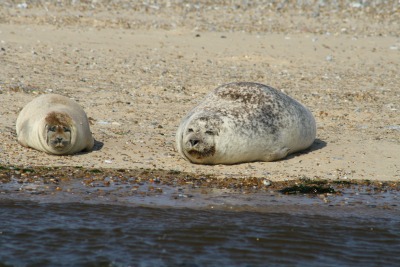 Nature at its best at Blakeney Point

The wonderful experience you get from taking one of these seal trips is seeing nature at its very best, in its natural environment.  It’s awe inspiring to see these seals going about their daily life without being disturbed by the boats, producing pups, but at the same time giving us a real taste for the wildlife in Norfolk.  I really enjoyed my seal trip, I’ve done it three times now, twice in the summer and once in the winter, and all three times have been an absolute joy.

For more information on seals in Norfolk, pop over to my detailed page on the seals here.

The other excellent place to see the seals in Norfolk from November to January/February is on the east coast at Horsey beach.  Here you get a completely different view point of the seals.  They all bask on the beach while looking after their pups, and you can watch from a viewing platform, organised by a knowledgeable warden.  Why not do both Blakeney and Horsey?

More on Seals in Norfolk

THE ULTIMATE GUIDE TO SEALS IN NORFOLK

For your guide of where, when and how to see the seals in Norfolk, why not buy this downloadable pdf which has all the information you need in one place.

It's your Ultimate Guide to Seals In  Norfolk.  It has  everything you need to know about seeing the seals in Norfolk, whether it be at Blakeney Point in the summer months or Horsey Beach and Blakeney Point in the winter months, how to get there, info on the boat companies, best time to see them etc. 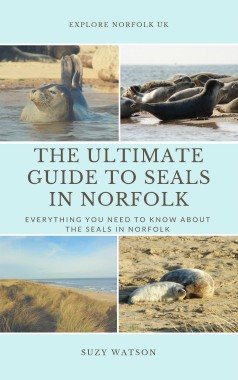 "Thank you very much, can't wait to go and see them, and your e-book is very useful" 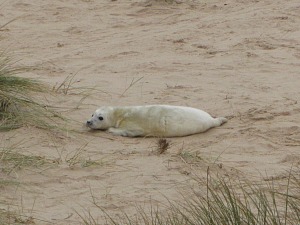 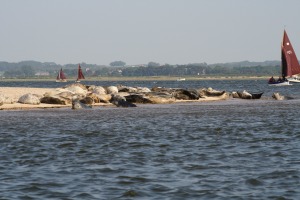